Peace be with you.

When will we learn war no more? Hospitality overcomes hostility just as hope overcomes judgement.

How is it that a community built positively on Christian Tradition would still punish each other rather than mentor? Why is it that so few Christians have ever heard of Jesus’ Kingdom of Peace, let alone enter into it? What can humanity do for Peace? Where can we learn how not to be offended, equally as we learn how not to offend, and together play our part in taking away the offences in our world and shortcomings of us all and so learn war no more, together? Mankind’s greatest expenditure is spent on weaponry fighting violence with even more violence while Scripture suggests that Humanity can learn war no more.

When humanity is willing to learn how not to become offended as equally as we learn how not to offend then there becomes no offence and we take away the shortcomings of us all, for where there is no offence than there is no sin, and where there is no sin then there is no war and we are only left with Peace. So why don’t we learn war no more? Is it because of the same reasons that the ice caps are still melting and we still do nothing of substance to rectify it? Is it the fear of moving awkwardly out from the comfort of control and living in an exclusively known domain and out into an unknown all-inclusive Community? Possibly the fear of breaking out from being the big fish in the little pond into becoming a little fish in the big pond? Or as for the same reason a Woman still can never be a Pope? 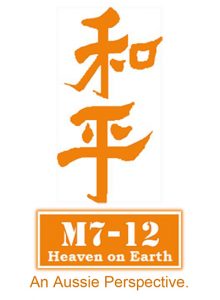 With the responsibility of necessary things comes the responsibility of necessary change. All have access to God. All are Children of God, whether you believe it or not, it doesn’t matter because it’s a bit like gravity, it’s just the way it is. Because of Christ all is forgiven, past present and future and therefore all can forgive, guaranteeing all Humanity an equal opportunity world for all. Leading by example into a better place brings the joy of freely learning how all things can become new again (we have a better hope) while the learning of obedience by the things that we suffer (punishment) only adds more suffering to our world particularly, by enslaving more into the captivity of ownership arousing rebellion against the more powerful exercising their own power over us more so and rather than serving us as true leadership does. Your mentoring can replace your punishment and Humanity can bring joy to our world instead of adding more suffering to it. What you believe determines your behaviour and what we believe determines our behaviour and so what many believe many will do and therefore not only are we personally responsible for the consequences of our own actions, but also personally responsible for the beliefs that we hold that get us acting the way that we do.

Peace and Goodwill to all Mankind is a pretty simple message and Matthew 7:12 simply tells of how to achieve it, not by force but by grace and truth, which is to say, Love. We can keep the faith and hear from God for ourselves. It is not law that makes us holy. Only God can do that. And the only way to God is to ask God. Scripture also suggests that Peace and The Governance Thereof is ever-increasing henceforth and forevermore, and that it is God’s Will performing it. Has the good news of Jesus’ Kingdom of Peace and His Golden Rule of treating People as equally as we would treat ourselves getting left behind and slowly forgotten? Is it time yet for the reformation of The Gospel of Peace? Self-righteousness is the root cause of all violence, discrimination and greed only drives People further into more self-centred, selfish, self-serving interests.

Innovations the hope of better bring forth lifts us above the stagnation of standing in judgement over right and wrong because right and wrong will divide both while seeking better reconciles them both together, bridging the ever growing great divide between right and wrong, turning two into one and so making peace. We can ask God to be our conscience for us, give voice to God within our own brains and trust God more. Peace and The Golden Rule is His Kingdom Come and His will being done.

Peace is the very reason for the existence of Mankind. Peace is Heaven’s Name, Meaning, Will and Glory. So what’s the hold up for Humanity and in particular Christianity to Peace? May The Lord God Almighty renew the desires of all our hearts to coincide with the desires of His Heart, and by the guidance of divine wisdom may we all be doing unto others, as we would have others be doing unto us, that we be one within that, endeavouring to keep the unity of the Spirit in the bond of Peace gracefully at all times and in all situations. May our peace be continually renewed unto Your Peace Lord, and that our wills, be willing to will so, so that we may experience the fulfilment of your mission Lord, Peace on Earth, Goodwill to all mankind.

Peace is better than war.